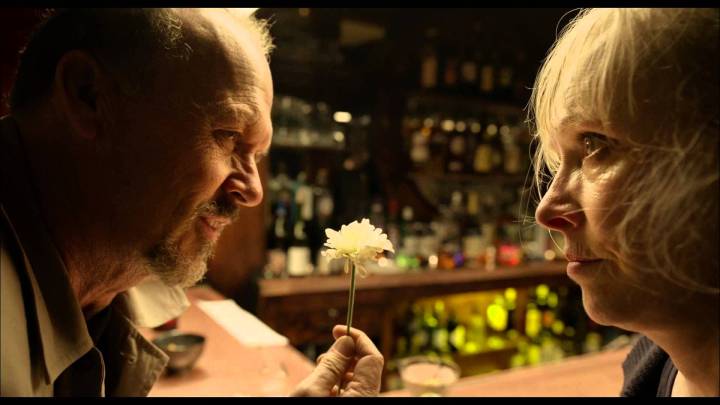 One of the my favorite scenes of Birdman, directed by  Alejandro González Iñárritu, is the bar scene, in which both Michael Keaton and Edward Norton have unique interactions with the character of Tabitha, a NY times critic played by Lindsay Duncan. While Tabitha is not a main character, her presence and dialogue stick with you through the film due to the power she holds over the character for that moment, and the way each character interacted with her. It’s so hard to shake off the thought that regardless of all his actions, he might get a bad review from her and it’ll all be over.

What really struck a nerve for me was that the film perfectly portrayed both my problem with modern critics and with the people that praise critical success. There have been plenty of films which show the hatred of artists towards critics, but this film also shows the ignorance the artist being criticized can also have.

Why some artists hate critics:

As an artist and fan I have mixed feelings towards critics. When a film I love gets good reviews or a film I hate gets horrible reviews, It’s a joy going into IMDB and looking at critics opinions praising or destroying the films. However, when I look at a bad review for a film I loved, I tend to go off in a rant at the critic as though he/she could hear me.

Critics in film are often shown as egotistical people to have a superiority complex, in which they know the power their words have to the masses. This is how artists really see critics. As egotistical ranters who are obsessed with their own opinion, and the worst part is people listen. Bottom line, the reason artists hate critics is because no ones, I repeat, NO ONE’s opinion should ruin the success of a work of art. But it does.

I myself think critic opinions are overrated. However, I also think even as artists, the hatred for critics is biased. An opinion is an opinion, regardless of whether it holds power or not, and you should also not let someone’s opinion hinder your focus on what really matters: The work. After all, critics, fans, and artists are all equally hard to please. This is my opinion on why a critical point of view is important, and simultaneously, why it’s not.

Critics are often people that know film history and often watch films. There’s a huge misconception that they’re douches who sit at home all day writing their opinion on things. However, some of the best critics have their very own film making degrees and tried to make it in film business themselves. There are some critics which are screenwriters, producers, and love film as a whole. The reason people have this misconception is because of one thing: Bad reviews.

There’s that one critic that rated that film you love a 3 out of 10, and you hate him for it. Why? because you didn’t notice what was wrong with the film. When a film feels weird or bad, it might be due to the editing, pacing, narrative, characters, directing, acting, cinematography, or message that doesn’t hit… There’s one thing that critic haters need to understand: Unlike a fan who watches a film because he or she is excited to see it, Critics are here to find flaws, not to praise every small thing a film does well. One fatal flaw in a reviewer’s eyes might mean a bad review, regardless of how cool or moving the story might be.

The main reason critics are important is because Film is art, and art demands to be talked about and debated over. Great films have not managed to keep their classic status over the years because of Box Office or critical success… They manage to be classics because people still talk about them today. The main reason critics exist is because they are a means to start a conversation or debate deeper then someone just saying, “The movie was good.” Opinion and interpretation is important regardless of whether it’s wrong or not, and critics always have their own. This is why some of the best classic films had mixed reviews when they first came out. Don’t believe me? just read some of Stanley Kubrick films reviews.

At the end of the day, even if starting a conversation, what are critics really giving you? An opinion, from an imperfect human being who probably had different experiences and thoughts then you would ever have while watching the movie. You should never let anyone tell you what your interpretation of something should be. And even though critics don’t mean to do that, popular modern society lets the critics be the decision maker on whether a film is worth watching or not. The problem is, some beautiful, unique, strong, memorable, and borderline revolutionary films have come in the last few years which have gotten horrible years. If you’re missing out on them due to the fact that they got bad reviews. You’re stupid.

The Washowskis are an example of extraordinary film makers who have been battered by critics. The matrix trilogy was extremely philosophical to the point where some teachers use it in classes now. Speed Racer was an attempt to use color and green screen to make a live action film which felt like a cartoon at heart, and Cloud Atlas was an incredible experiment in directing and editing what is basically three movies/ six stories which are connected by it’s characters.All of these at some point in time, where also destroyed by critics. Why? Maybe because the Washowskis made critics look like fools when they made a special feature for the Matrix trilogy, in which they portrayed certain philosophy experts explaining why they loved the film, and certain critics explaining why they disliked it. In the end the Washowskis (successfully) show that the critics who didn’t like the movie where not paying enough attention to what mattered and completely missed the point.  Critics took that to heart, and since then it’s been bad reviews for the Washowskis.

Now I’m not saying this is a definite truth and critics are out to get the Washowskis. What I’m really trying to say is that the Washowskis showed something important that you as a movie goer should keep in mind. Film is  about perspective, and human perspective can be very biased. There now are so many critics, Youtube channels and blogs made for reviews that anyone with half a brain can look at any subject and realize that there are several different opinions and conflicting views about every single subject you can think of. Your own opinion is really all you can rely on in this day and age.Let’s face it, people listen so much to reviews that it’s not extremely unrealistic to think that production companies don’t pay off famous critics just to get a good review. So who’s opinion can you trust?

And that’s why I’m not writing reviews anymore.

I want you to try something out tonight. Go on a streaming service, and find a fairly popular movie you’ve heard of, but haven’t read a review for. Sit down, get a snack and a drink, and watch it from beginning to end. After you’ve done that, think about whether you liked or disliked the movie. Now, think about this…

1: If you would have read a great review for that film before you watched it, would your expectation be high enough that you would’ve liked it less?

2: If you had read a bad review, would you be looking for the flaws mentioned in the review while watching the film?

And finally: If you would have read a horrible review for the film you just watched, would you have even given it a try?

I believe that this answer will vary depending on who’s reading, but regardless of answers, looking at a critics review of film changes too many things. It changes your expectation of the film before you watch it, your unique experiencing of the film while you’re watching it, and sometimes even  your opinion of the film once you finish watching it. Once someone else’s opinion, whether a critic or otherwise, enters your brain, you will see things differently even if only a little.

A lot of people have asked me why I don’t write reviews anymore, and I think that about sums it up. I don’t want to ruin anyone’s fresh opinion of a film, or over hype someone for a film which they might not like as much as I did.

I believe there’s a films out there meant for every specific person to enjoy. So if you’re reading this, and you normally look to a critics review to decide whether you’ll be going to watch a film or not, by all means, do it… but think about this.

You might be missing your favorite movie of all time.

5 thoughts on “The Critic Paradox: Why I’ll Never Write a Review Again.”

Movie reviews at the point of no return

Thoughts and opinions on the world of cinema.

Film The Madman
Make Mine Criterion!

Well, someone has to be!